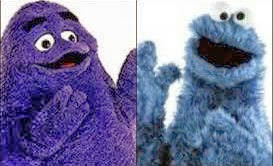 “When you think about it zoologically, Grimace is clearly related to the same species as Sesame Street‘s Cookie Monster. Both have similar body shapes – dark colors, mottled hides, those darting black eyes and, most significantly, both have an obsessive compulsion to consume one single item of American junk food. They’re practically twins. Of course – and this is crucial – Grimace is less of a moralist about the whole thing. Unlike Cookie Monster, Grimace doesn’t care if you can count from one to ten, he just wants his milkshake. “Ya, ya, C is for Cookie; J is for Just give me my fucking shake, okay?”
-“The Return of Grimace” in Certifiable, David McGimpsey

So… here goes. A new year with new books and maybe the return of a few favourites. Most of my books come as lenders from friends and the library, or from second-hand shops and the Sally Ann. It’s rare that I go out of my way to find a specific book to read, but that might change. I ordered my first two books online! The only thing I’ve ever bought online before were football shirts and winter boots with someone else’s credit card. And although I still don’t believe in credit cards, I was able to do it with a gift card. I’ve had a backlog of books I’ve wanted to read filed away in my brain… hoping to get to some of these this year.

Dance of the Seven Dwarfs by Zsolt Alapi
Certifiable by David McGimpsey
Hellgoing by Lynn Coady
Pilgrims by Gabriel Garcia Marques
Hero of the Underground by Jason Peter with Tony O’Neill
A Feast of Snakes by Harry Crews
The Corrections by Jonathan Franzen
Everything Ravaged, Everything Burned by Wells Tower
Getting Naked with Harry Crews: Interviews | edited by Erik Bledsoe
Emerald City by Jennifer Egan
The Book of Woe: The DSM and the Unmaking of Psychiatry by Gary Greenberg
BabyWorld by Jonathan Martin Dixit
The World According to Garp by John Irving
The Power and the Glory by Graham Greene
The Rebel Angels by Robertson Davies
What’s Bred in the Bone by Robertson Davies
Amelia Earhart by Kathleen C. Winters
All the Names by José Saramago

I would also like to read more than I did last year… but am happy not be in a reading paralysis. For a great list of reccomendations, check out Roxane Gay’s My 2013 in Reading