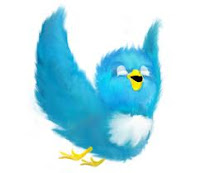 I live in The Land of Twits, and I like it. Well… most of the time. I haven’t met ninety percent of the people I follow because my “real life” friends don’t participate, but they are curious.

I created my first account two years ago during a bout of insomnia. I didn’t tweet much in the beginning, not understanding the point of it all, so just lurked about, reading what famous people were saying.

Then one night, I convinced myself that Twitter was an extension of the Illuminati – I listen to Coast to Coast a lot! I deleted my account and vowed never to return. Six months passed, and another sleepless night had me back on.

Questions from those keen on joining the Land of Twits:

Who should use Twitter?
Anyone who wants to connect with a particular community, locally or internationally. I use it as a way to network with other writers. There’s a niche on the site for everything. Or… anyone who has time to fart around, reading what celebrities are blathering on about.

What do you Tweet?
Most of my tweets are writing related – process, events, links to my blog, articles, other writer’s sites, quotes, and yes, the odd cat photo. I generally dislike Facebook updates but, for some reason, don’t mind sharing random thoughts and activities with people I’ve never met.

How often do you Tweet?
Sometimes a few times a day, sometimes not for days. My quantity is reliant on mood. I tweet more when I’m in a good head space.

Do you engage with people on Twitter?
I don’t unless someone tweets something I can’t resist replying to. You can communicate through the newsfeed which is visible to followers or direct message which is a private internal email system.

Do you follow someone if they follow you?
This is the polite thing to do. If someone follows me, I check out their account to see what they talk about. I need to be interested in what someone has to say to follow them.

How long does it take to build a following?
I don’t focus on this aspect, mine has been gradual. You can increase your followers by following like crazy because most people are polite.

Is it a waste of time?
I was on it a lot more when I first joined and thought it was a bit addictive. Now it’s more in my periphery. I do enjoy the connections I’ve made; it would be cool to meet some of these people in person.

What annoys you most about Twitter?
I think it’s a great way to praise and promote others’ work and passions, but I’ve seen a fine line between this and being a sychophant. As with most things, moderation is key.

Do you think Twitter will be replaced by something better?
Probably… either that or the Illuminati will gain control, and I’ll be forced to quit again.