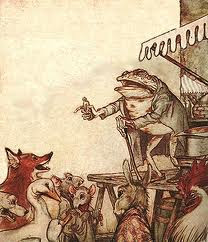 Months ago I was contacted by Robin D. Laws, Creative Director at Stone Skin Press. He asked if I would be interested in writing a fable for an anthology. Richard Scarsbrook had passed my name along.

My first thought was—fable, what’s a fable? I knew there were animals in these tales and usually a lesson of some kind. Off to the library I went to investigate.
Commonalities I found included talking animals, the appearance of humans although rarely referred to by name (the boy, the farmer, the vet), lots of dialogue (often the last line), descriptive verbs and adverbs, the occasional God (Aphrodite, Zeus) as character, an omniscient pov, and an amusing tone. The morals often related to a deadly sin with a single action ending the story. Stories ran 100-400 words and their titles were often simple (The Neighbouring Frogs.)
A project brief explained the boundaries. The fable was to be original, not a retelling of an existing one; word count to be 300-1500; the tone a mix of “pedagogical seriousness with 2,500 year old whimsy”; and the message could be expressed as a last line of dialogue or left implicit. I would have two months to finish the fable. Surprisingly, I was very calm about having a deadline, it helped me focus.
Robin had received a first wave of fables and said he had enough featuring cats, mice, and fish, as well as stories in which the main character gets eaten by a predator at the end. Of course cats were to figure in my story, but that would have been too easy.
I wanted to choose animals I understood and my first choice was racoons (my mum raised orphans), but I settled on rats (wonderful pets) to be the main characters. I added an army of cockroaches as I’d had the unfortunate experience of living with these. I sent Robin my synopsis: “Domesticated husband and wife rats share flat above sandwich shop with band of cockroaches.”
I knew my story and thought the moral would clarify itself as I went through—not exactly. A friend suggested I choose the moral first and then write from there, but I was already set on the storyline. I was lucky enough to workshop “The Rats and the Cockroaches” with Richard Scarsbrook and Dan Perry (both in the anthology), and F&G Writers. It’s reassuring when the concerns you have are reflected in other’s feedback. This happened again when I sent Robin my final script. He pointed out something, which I thought I might be getting away with. A few more tweaks and zoop—out to the universe.
Super excited to read the anthology. Keep you posted.