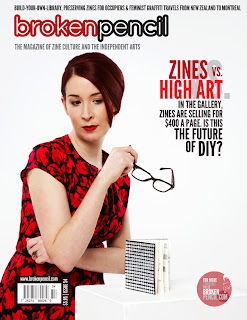 My short fiction “Girl in Dryer” appears in Broken Pencil 54. The story revolves around Alice, a twelve-year-old who lives with unrelieved suspense. She gains temporary relief when she befriends a man and his pig.

This story, inspired by a dream, has four firsts:
﻿﻿

First story to be accompanied by illustrations. Beautiful work by Lisa Vanin.

First story I workshopped with F&G Writers, my amazing writing group that will celebrate its two-year anniversary this May.

First time I was invited to participate in the editorial process, a back-and-forth dialogue with BP founder and fiction editor Hal Niedzviecki.

First time I have been paid for any piece of writing. Have to think of something special to do with it.
﻿﻿﻿

Time again for Broken Pencil’s annual literary brawl. I thought about submitting last year but instead followed the action from outside the ring. What a ride!

Eight stories go head-to-head online. Authors discuss, defend, and duel with other competitors and commenters from the outisde world.

I have the constitution a writer needs to handle rejection and criticism, but when the Deathmatch began it was a whole other kind of writerly abuse. Sure, some of it was tame and encouraging but by the third round the gloves came off. Beat downs between writers and commenters ramped up the competition. It got ugly, and I loved it.

The Deathmatch became a healthy addiction to stave off my winter blues. After work, I couldn’t wait to read what backinthesaddle or succincubus (regulars on the board) dished that day. Most writers handled the pressure of a seven day round, but a couple did go into hiding. Comments ranged from jabs at the craft to cheap shots at cheating.

Two weeks in,  and I was ready to join the arena with an alias of course. It took restraint at times not to throw a few punches of my own, but I focused on the stories, the writer’s life, etc. Even the most dreaded commenter gave me a virtual pat on the back.

When the dust settled and the ring closed, I suffered withdrawl as with any addiction. David Griffin Brown was the last writer standing with “Brink”. And when Broken Pencil #51 came out with the top four stories,  I saw they had also printed one of my comments. My alias was published in BP before I was.

If you want exposure, enjoy craft-swapping, love trash-talking, and have a thick skin, I dare you to submit. And if you can’t afford a SAD lamp get on the comment board. 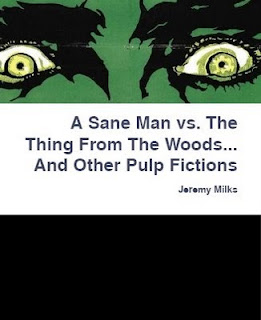 ‘Five blood splattered stories in the tradition of classic pulp novels, Italian “giallo” films, H.P. Lovecraft, grindhouse horror movies and “creature features” from a bygone era. So grab a beer, put your feet up and prepare to get your face ripped off (in a good, clean, fun way of course!).’