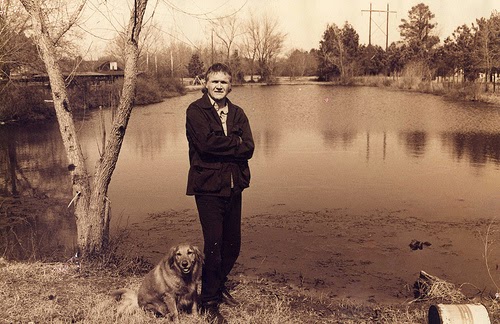 Excerpts from Getting Naked with Harry Crews

“If you’re gonna write, for God in heaven’s sake, try to get naked. Try to write the truth. Try to get underneath all the sham, all the excuses, all the lies that you’ve been told. Sometimes the lies were told you by people who meant you well, and who meant the very best for you. Your mama might have. I know my mama told me some of them great lies. She didn’t mean it. She didn’t think they were lies. She didn’t think they were lies then, don’t think they’re lies now. I know in fact they’re lies. Don’t make her bad, it’s just the way we are. But if you’re gonna write fiction, you have to get right on down to it.”

“Conception is pristine and pure and has all manner of hope in it, but between conception and execution, something gets lost. I’m sorry, bud, don’t let anybody shit you, there’s a big gap there. There’s always going to be a big gap there, and you can drink yourself to death over it or you can shoot yourself in the head over it or you can be an asshole to your family about it. There’s a lot of ways you can handle it, and everybody, every man and woman, comes to their peace with that however they do. I got no advice here, everybody works it out for him or her self.”

“As soon as something pleasant and cheerful and confectionery occurs to me, I’ll write about it; but I can only write about whatever comes. And what has come thus far has been a kind of blackness.”

“When I start writing, I say to God, ‘God, give me five hundred words. I don’t want to be greedy, although I am at times a very greedy person; but I’m not greedy today. Give me five hundred words and I’ll be satisfied. I don’t want to know the whole rest of the book. All I want to know is the next five hundred words. Thank you. Amen.’ And then, do it. Five hundred words, after all isn’t much. If you double-space and you’ve got good margins so you can make notes to yourself, you’re only writing two hundred and fifty words a page. That’s two pages. Now that’s going to sound very mechanical, very arbitrary, but that’s the way I do it. That’s the way I think. Many times those two pages go somewhere else, usually the trash basket or furnace. Andrew Lytle used to say, ‘Fire is a great refiner.’ And it is.”

“I’d give you this: that to be a fiction writer means you spend most of your time thinking about, meditating upon, trying to dissect and understand just those aspects of the human animal that other human beings try their damnedest never to think about.”

“Being a fiction writer is a good way to go crazy, it’s a good way to be a nervous wreck, it’s a good way to become a drunk. You continually pick at yourself, the little sores that you have. They scab over and you pick them open again. Other people not only let them scab over, they let them scar over. They leave it alone. Writers don’t do that. They can’t keep their fingers out of the sore. They’ve got to keep it bleeding. And it’s off that blood that they make their stuff.”

“And my mother to this very day does not understand why somebody would give you good money for something that was made up. As John Updike said when he accepted the National Book Award, ‘Fiction is a tissue of lies that’s truer than anything that ever happened.’ Yeah, the nuts and bolts in there may not be the truth, but the truth of the heart, again, those great abstract nouns, ‘hope’ and ‘despair’ and ‘love’ and ‘ambition,’ and all the rest of it. Those are the only things that are worth considering anyway, aren’t they?”

“Talent helps. Listen, get all the talent you can. But writing is guts and it’s courage. You cannot have a failure of courage. Everybody in the world is telling you you’re no good, and you can’t do it, and it’s not going to work. You’ve got to keep talking to yourself, say, ‘Come on, son. Come on…”

“I know writers are very fond of saying that they’re not in their own books: ‘Don’t look for me in my book, I’m not in here anywhere.’ Well, they probably are not in there in full form. But their prejudices, their sentiments, their biases, their angle of vision on the world – to say that’s not in the book is bullshit and they know it. ‘Don’t confuse me on some kind of one-to-one basis with somebody inside the book.’ This is particularly true if they’re writing a first-person novel. Readers are often inclined to confuse the voice, that ‘I,’ with the person that’s writing it, but that’s a distinction that writers insist upon, and I think rightly so. I know I sure as hell do.”

“You have to go to considerable trouble to live differently from the way the world wants you to live. That’s what I’ve discovered about writing. The world doesn’t want you to do a damn thing. If you wait till you got time to write a novel or time to write a story or time to read the hundred thousands of books you should have already read – if you wait for the time, you’ll never do it. ‘Cause there ain’t no time; world don’t want you to do that. World wants you to go to the zoo and eat cotton candy, preferably seven days a week.”

“I can’t understand anybody who tells me that they enjoy writing, that it’s fun. Frankly, I don’t believe them. It’s certainly never been fun for me. What is a real rush, for me, is after you’ve done it, before you even sent it to New York, and that’s it. I know this is strange, but when you look at it, and you think, ‘Before me, this was not. Because of me, this is.’ Now that’s a rush.”

One thought on “Harry Crews On Writing”