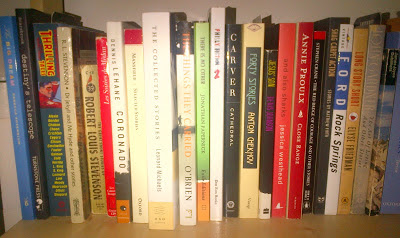 Daniel Perry is a fiction writer living in Toronto. Nobody Looks that Young Here is his first collection of short stories.

1.  Do you have an early memory of learning to read?
Yes, though it’s more of a recounted memory than something I clearly remember. Before starting kindergarten, in my school, you and your parent(s) would come in for a short sit-down with the principal. (I wasn’t supposed to be there, actually, but I was, with my father.) I had spent most of life to this point watching Sesame Street, and my parents had been teaching me, so I was a reader before I had even started school. The story goes that my dad asked the principal if I’d be challenged enough; “He can read, you know,” to which the principal said, “Well, I’m sure he knows a few words.” Dad picked up a for-parents pamphlet from the desk and handed it to me, saying “Dan, read this.” I asked where to start, Dad said “At the beginning,” and I’m told I sounded out pretty much the whole thing, and the principal said, “Holy shit, he can read,” (though that last bit sounds like standard working-class point-scoring). I didn’t end up skipping a grade – I’m born December 31, which would have made me two years younger than some classmates – but they did put me in French Immersion, which means I’m lucky enough to be able to read in two languages.

2.  Have you always been an avid reader?
Other than a six-month dry spell after I washed out of grad school – I got the master’s, but didn’t turn up the next fall for the Ph. D. program that accepted me – I’ve always read, moving from Curious George through the Hardy Boys and R.L. Stine into John Grisham and Tom Clancy before hitting high school and getting into capital-L literature. I remember in undergrad, a former girlfriend’s roommate saw me somewhere that wasn’t campus and observed, “You always have a book with you, don’t you?” It’s especially true now that I live in Toronto and take transit everywhere. I never leave home without one.

3.  How do you decide what to read next?
For the longest time, if I read an interesting review or excerpt, I’d go straight to the Toronto Public Library website and place a hold. What I read would then be decided by what came in when, and which books were closest to their due dates… and I was so overcommitted, most books spent the full nine weeks (three week loan, twice renewed) in my apartment. I’ve taken control, though: for 2013, I’ve placed myself under library moratorium and focused on reading books that I’ve bought but not read. There is a specific Read-Once-And-Get-Rid-Of pile that’s right beside my writing desk. I’m steadily plucking books off it, but it’s somehow growing anyway…

4.  Do you have any reading rituals that you follow?
I try not to start a new novel unless I have enough time to get through a good 50 pages in the first sitting; reading Chapter 1 on the subway to work and Chapter 2 on the way home only results in having to read them both over again on the weekend. Also, I make myself write a paragraph about every book I finish, a sort of journal that I post from on my blog and my Facebook page.

5. What makes a great story or novel?
Selection. I struggle with it in my own writing sometimes, but to me a good story contains absolutely nothing that’s extraneous; as Chekhov said (paraphrase), if there’s a gun on the mantle in Act I then it had better go off by the final curtain. I go crazy reading novels in which every character is introduced with a paragraph about what they’re wearing – it so rarely comes to bear on the story! Show me what I need to see, and ditch the rest. Get on with the story. I haven’t read him in a long time, but I remember thinking there were no wasted words in Stephen Crane’s work.

6.  Do you have a favourite genre?
I don’t think so… unless Literary Fiction is a “genre.” I try to read all kinds of different books, throwing in the odd thriller, mystery or historical page-turner to offset the classics, the award-winners, and the disproportionate amount of good, good, whole wheat CanLit.

7.  Who was the first author you fell in love with? The last?
Leaving aside the series I loved as a kid, I think the first author I really devoured was John Steinbeck. His books were generally short, emotional wallops, and my dad was a fan; we had all the old Bantam paperbacks. Growing up in rural southwestern Ontario, I found they dealt with a kind of life and a class of people I could understand. More recently, I’ve read three books (and bought one more) by each of the New Zealand writer Lloyd Jones (try Mister Pip) and Kingston, Ontario’s own Steven Heighton (whose novel The Shadow Boxer is one of the most criminally under-celebrated books ever produced in this country).

8.  What classic or well-known book have you never been able to get through?
The Lord of the Rings. This might go back to Question 5: too much scene setting. Eighty pages in, and still nothing’s happened…? No thanks. Tried it three times.

9.  What book or books do you reread?
I rarely reread – there are too many books in the world! – but I recently reread an assigned undergraduate book, Thomas Mann’s Death in Venice, as a mate to Geoff Dyer’s Jeff in Venice, Death in Varanasi. From time to time, I also pick up Tim O’Brien’s The Things They Carried or Denis Johnson’s Jesus’ Son. These two books contain some of the best short stories of our time, and I can always learn more from what they’ve done with the form. Plus, Johnson’s book is so small, I can read it on the streetcar on the way to a Jays’ game then put it in a pocket and not have to worry about lugging it around all night.

10. Do you have dry spells where you stop reading or read very little?
No. I sometimes wish I did, but I’m pretty steady: five books a month.

11. How do you organize your collection?
I have a small bookcase for drama, poetry, and non-fiction – most of it left over from university or high school – and two larger fiction cases: one for the books I’ve read and one for the unread. The small bookcase and the stuff I’ve read are alphabetical by author, while – aside from one shelf that’s restricted to short story collections – the unread bookcase is in no order whatsoever.

12. Do you enjoy recommending books to others? What criteria do you use?
I do enjoy recommending books, and I try especially hard to think of what the person likes: similar authors, style, subject matter. I read somewhere that Scandinavian cultures consider a book the most thoughtful gift you can give – long winters, just like we have in Canada – and I can’t say that I disagree. Turning someone on to a given author is a pleasure, and it’s especially nice to have the favour returned: I’ve never been into SF, but a friend suggested China Miéville’s The City & the City to me recently, and it’s one of the best books I’ve read in the last year. A great reco makes you feel honour-bound to do just as well by your friends.

14. Do you write? If so, how does reading influence your writing?
I do write, primarily short stories, so it’s almost the other way around: my writing has greatly influenced my reading, in the sense that I’ve probably read a thousand short stories in the last three years, and continue to be fascinated by them. There’s no one “right” way to do it, and I’ve come to like stories so disparate that (hopefully) no one influence is too discernible in my own work (except, probably, Alice Munro). What I find that reading does do is remind me how it feels to be a reader, and keeps fresh that feeling of disappointment when characters, scenes or (especially) sentences don’t pay out; I often catch myself revising as I read, saying “I’d have said it this way.” It’s like a passive(-aggressive?) form of writing practice, I guess.

15. What are you reading right now?

I want to mention two books I recently finished, Canada by Richard Ford and The Marriage Plot by Jeffrey Eugenides, because they’re two very accomplished contemporary novels, and big books that don’t feel at all unwieldy. And as I write this, it’s Super Sad True Love Story, by Gary Shteyngart – funny and clever story of a loveable loser, set in the new future. I’m enjoying it.

Ravenous Reader is a regular series.